Over the last week I have had ago at two bowls. the first one was the a bit of beech (right) which turned extremley well. only down side is when I tried to add decoration the tool dug in which was an annoyance after putting a decent finish on it. But looking at it now its not as bad i originally thought it was. the second bowl was a piece of willow (left) which I have been testing out recently with mixed results. I have found that green willow is difficult to get a good finish on but peel off the bark and leave to dry for a day or two removes some of the moisture which helps. 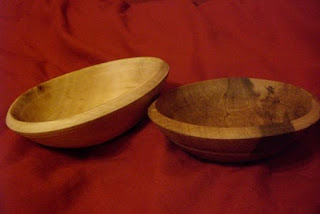 The special bowl that I oiled up last night was a quache made out of a piece of maple. It was pain turning the handles but was worth it for the end product. Even better was when I oiled it the wood also went a lovely orange colour as you can see. 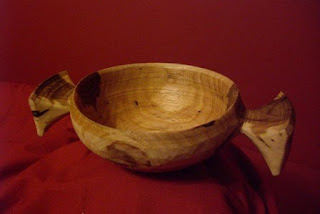 also roughed out some spoons last night becuase its been a while since i've done one. They are both pieces of sycamore which were part of a small tree felled across the road from me. just wait for them to dry a little then i'll apply the finishing cuts. 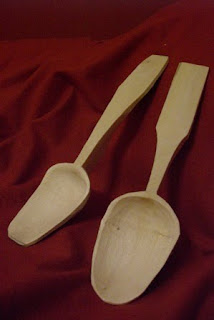