Holiday Holland, and some nice tools

this past week I have been on holiday in holland with my girlfriend and whilst visiting there were some lovely historical museums that we visited, with some wood work related history.

the first museum we visited was called Archeon located near Alphen aan den Rijn, Though calling it a museum is an understatement. It focuses on living history re-enactors recreating the living conditions of High Medieval, Roman, Iron Age, Bronze age, Neolithic, and further back. While all these areas were interesting with roman massages, neolithic bread on a stick, and medieval seal making the area that interested me the most was the bronze age. The re-enactor in that area had a wonderful collection of bronze axes in that just seemed too amazing not to look at. She asked me and the public to setup the axes in he chronological order, which i had correct. The two on the left being the earlier as they would work but the handles would eventually split. The two in the center were later and better designed to incorporate the strength of tree branches and having the axe head slotting into the head. This design must have given better results with fewer broken handles but again the wood would most likely spilt eventually. the axe on the far right was the latest design for bronze axes which incorporated the bronze head with a socket for the handle to attach too. This design would have been given the best longevity to the bronze axe and this design was even incorporated into the early iron axes of the iron age. 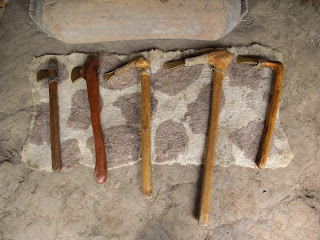 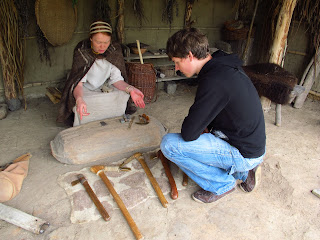 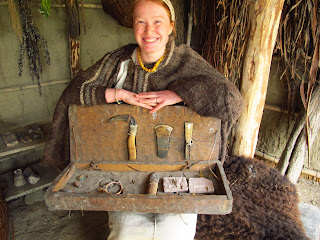 I certainly enjoyed the axes and the knowledge behind them. She couldn't help and show off her collection bronze knives and arrow heads. I also got to have a go with a bronze axe  in peeling an ash log, although it had been heavily used by other members of the public. 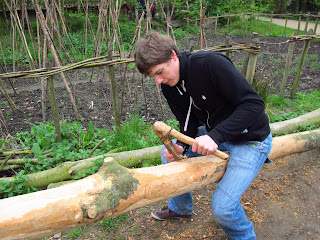 In the archaeology section of the museum there were some lovely medieval finds from holland, Including a lovely axe/hammer and an adze. I wonder what kind of workman would have used an axe and hammer at the same time? 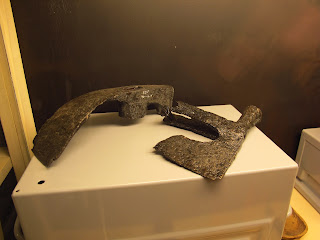 Not to mentions a lovely selection of medieval bowls and some excavated spoons. It is interesting to see how simple they are and how they undecorated. simple and useful utensils :-). 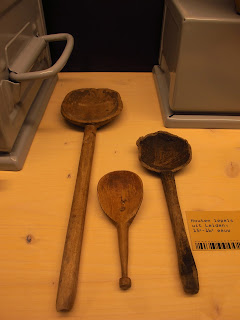 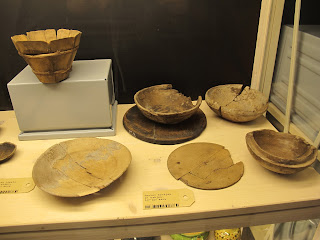